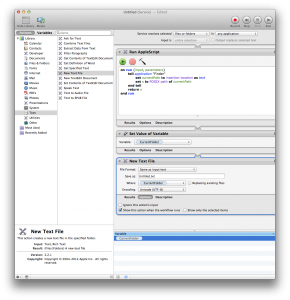 Actually it is no so easy to restart Postfix in Mac OS X 10.8 Mountain Lion like in Linux :-)

However you can restart Postfix by plist unload / reload:

How to Flush DNS Cache in Mac OS X

After upgrading to 10.8.2 I have got a problem with adding a new entry into hosts file: the update was recognised only after system restart. But a more easy solution was just to flash DNS cache! So,

... flushing your DNS cache in Mac OS X is actually really easy, and there are two different commands to use, one for Leopard and for Tiger. Depending on your version of OS X, open your Terminal and follow the appropriate directions below:

Launch Terminal and enter the following command, you will need to enter an administrative password:

Note the dscacheutil still exists in 10.7 and 10.8, but the official method to clear out DNS caches is through killing mDNSResponder. You can also find that process running in Activity Monitor.

All done, your DNS has been flushed. On a side note, the dscacheutil is interesting in general and worth taking a look at, try the -statistics flag instead for some stats.

Type the following command in the Terminal:

There is an error while sending mail in Mac OS X Mountain Lion 10.8:

To fix just run in terminal:

The solution also fixes an error in 10.8 where the fax service has stopped sending emails after the 10.8 upgrade.

After file downloading a ZIP file with Safari this file is unzipped automatically. The original ZIP file appears to be deleted. Not so good!

To fix this behaviour just go to

Mac OS, MySQL: No such file or directory (trying to connect via unix:///

Error on attempt to connect locally to MySQL server DB with PHP on MacOS X Lion 10.7:

No such file or directory (trying to connect via unix:///var/mysql/mysql.sock)

Do not forget to restart Apache after update :-)

The most simple way is adding the following new command in the X11-> application -> customize:

By default, the OS X installation does not use a my.cnf, and MySQL just uses the default values.

To set up your own my.cnf, you could just create a file straight in /etc, or do the following (excuse me if I say anything which is obvious to you, but this may help complete OS X beginners who are not familiar with the Unix command line):

and enter your admin password when prompted. You could do this from a non-admin account by using the su command, but that's probably a bit scary for some people ;)

You will now have a copy of my.cnf in /etc (just in case you don't know, that means the etc folder directly under the root folder, not under MySQL's install folder)

You can edit it with a text-editor such as TextWrangler by using File->Open Hidden, or if you are happy to use the command line, use: